After attending YOW Perth 2019 it is clear that IT is very much trending towards microservices and devops style of working being lead by AWS. This is something that Vix is currently undertaking and before the conference, I wasn’t too sure why. It seemed like microservices & devops were the latest buzzwords but now I see why. Its to foster innovation while enabling scaling. This is going to have a huge impact on ways of working in IT organizations and it might be the start of the downward trend of Scrum as Lean trumps.

YOW! was a single-track conference held in Hilton in Perth CBD which cost around $700. It was relatively small compared to DDD Perth and probably not value for money if you had to pay for it yourself. Lucky enough Vix was a silver sponsor and we got allocated some tickets so got to attend most of the 2 talks over the two days. We had a stand so I spoke to a lot people and I do wonder how many attendees would be there if you took out all the sponsors. Like many conferences, it should be considered a good networking opportunity and pick up 1 or 2 new ideas on the way. The food was good and the level of speaker was really high. The best thing about YOW! though is they put up all their talks on their YOW YouTube channel so you don’t have to pay the large price to hear the talks.

Kent Beck is the first name on the Agile Manifesto and one of the founders of XP Programming. I was pretty surprised to hear his story of the time in Facebook he had to reassess his philosophies about software development and start over. It’s really inspiring and a great example of a how-to work and self-improvement. He bearly touched on Facebook and its current tractory of crippling governments and fake news but the one thing he said it won’t be the last.

The result of this was 3X based on convex (explore) and concave (extract).

Expand is taking advantage of small bets winning and trying to scale them. Here are the Facebook notes he has written on this topic (in chronological order):

There are currently five talks by Beck on 3X, on YouTube and elsewhere (again, chronological order): 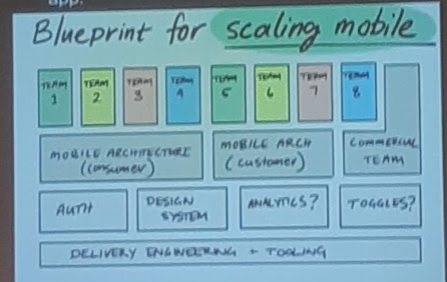 This was the talk that really helped me piece together the vision of how microservices works so well, highlighted in phase 2 of the image above. The talk discussed the two-phase approach the company took to get where they are which is demonstrated in the blueprint.

I couldn’t find the talk on YouTube yet but it is worth checking out.

Speeding Up Innovation by Adrain Cockroft

Adrian was part of Netflix when it was going through rapid expansion and now works for AWS. It’s pretty interesting he spent the majority of his talk speaking about culture and not the nitty-gritty of tech. It was pretty good and probably one of the vest slidedecks I have seen – it even had a spaceship being assembled.

All of Adrian’s slide decks: https://github.com/adrianco

Presented by an Ultramarthaton runner (I think I want to do one after hearing that) who is also a Scrum Master he spoke about sustainable pace in the workplace. This is the one talk that has stuck in my mind since leaving the conference mainly because of the conversations that I had after with people.

People were discussing 4 day work week, do you have 40 or 38 hours in your contract. Straight away the presumption was I should work less!!!! They seemed to miss the slide all about things on a personal level you can do.

The term “sustainable pace”, more general, was proposed by Kent Beck himself in replacement of the original “40 hour week” denomination for this Extreme Programming practice.

The Agile mindset views recourse to overtime, other than on an exceptional basis, as detrimental to productivity rather than enhancing it. Overtime tends to mask schedule, the management or quality deficiencies; the Agile approach favors exposing these deficiencies as early as possible and remedying their underlying causes, rather than merely treating the symptoms.