Over the past 2 years  I have started setting goals, which have been great and really helped me focus. I set goals for career, relationships, fulfilment and health. This naturally leads to creating a vision on what I want to achieve and setting my goals towards that.

Health is the one area I have been able to clearly define this as I have tried multiple things previously. From playing team sports (GAA) when I was younger and being the football captain. To spending 3 years doing kickboxing and numerous times having a go at trying to commit going to the gym doing an online program.

Then I started cycling in Dublin and set the audacious goal of completing the Wicklow 200. A gruelling 200km cycle over the Wicklow mountains where you have to climb nearly 2000m with some steep gradients. The first year I attempted to do it I did a few cycles and didn’t even actually attempt it in the end.

This failure motivated me to join a cycling club the following January and going out training every Saturday till June. I didn’t really know anybody, I wasn’t very good and as we got closer we were out cycling from 6am till 3 or 4 in the evening. It took an awful lot of time and pain preparing but it was all worth it and to date its still my biggest cycling/fitness achievement.

Then I stopped went through a few more phases of going to a gym to lose weight build muscle. I might have tried dieting but it all unravelled pretty quickly in general.

When I moved to Australia I set a new goal of completing a Triathlon. I think even back then I wanted to do an Ironman but it was never a realistic goal.

I joined a novice course with a club and ended completing the SunSmart sprint triathlon in Dec 2016. It was terrible I couldn’t really swim, remember having a fella follow me on a surfboard waiting for me to give up while I was getting lapped by the following wave. At least I finished it.

Went back and did another novice course for 2017 the same triathlon. All I did was train for the swim, – it was cancelled and the event turned into a dualaton of just cycling and 2 runs.

The following year I set out to do the 5 dams 210km challenge – but didn’t train and didn’t even attempt it. I did do the Kalamunda 100 in preparation which was pretty hard by itself a month before the 5 dams. I could have done the 3 dams but social life got in the way. Social life has had a tendency of getting in the way a lot.

I went home that June and when I came back in July my friend set out a challenge for the 2 of us to do the 2018 City to Surf 12km in August. I did most of my training on a treadmill at the gym in work and finished the run in 1 hour and 13 minutes. It was hard but I liked it so the following week set my sights on the Joonadulp half-marathon in November.

Then after we went on holidays to the East Coast at xmas I came back rejuvenated and was ready to set my next goal. I choose the Cork City Marathon as I would be home for it in June anyway. Started doing small bits of training but in early May I realized there was no hope and I was only fooling myself so cancelled that. (Ended up in Liverpool for Champions League final).

I was going to the gym a lot at the time but just not losing weight which was pretty frustrating tbh. This leads me to start focusing on my diet as a life choice instead of a 6-week challenge. I have been constantly attempting this but this time with a different mindset. After a few months, and lots of experiments I have a system where I take Salamon and a salad for lunch, a green smoothie all after 12pm so kind of a keto/slow-carb/intermittent fasting approach.

I do feel better from eating healthy and I think a big difference is cutting out processed food and sugar. I have started being prone to tea and biscuits but I’m hoping that will stop soon. Funny enough the big difference to weight though is running and training for City to Surf.

That failure did set me straight thought and what I did do was set a goal of the City to Surf full marathon, one year later after my 12km which was painful at the time – that was still a goal I could be proud of.

I did do the HBF half marathon in May so my training wasn’t wasted and did it in my set time of 2 hours. Also, when I went home I stayed training, running on a treadmill in Liverpool, running laps of Island wood and climbing Carountwohill.

Since I have been back I have steadily increased my km and took training pretty seriously. Monday 4th August 3 weeks before the full I did 28.5km my longest run yet and had to get Martina to collect me – it was very tough.

I have a clear mission statement to live a healthy life where I can get up any morning an be able to do a half marathon, cycle 80km or swim 2km. This entails of:

My big objective is to complete a full Ironman. Key Results Include:

It’s funny when I started writing this I was going to only write a paragraph about fitness but there was a clear gradual process of getting a clear vision.

Looking back now I realize I actually kept tipping away slowly till I realized this is actually what I want and committed to working towards the big overarching goal of an Ironman. (After listening to David Goggins you can’t hurt me I’m half thinking about an Ultra – always looking to overachieve). 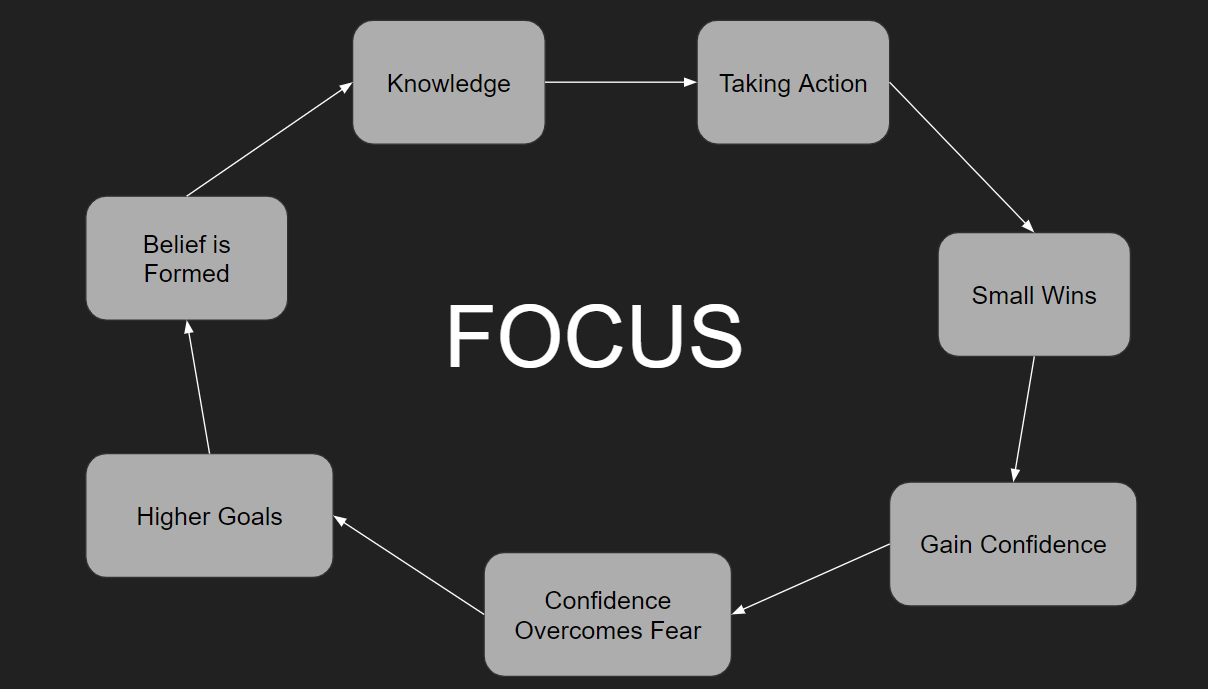 Using Focus to Create a Vision

I got the above diagram from Sam Ovens counselling course and have had it up on my wall since but never took notice till now. With fitness, it all started by taking action and those small wins. I now have a clear vision and goal to target which makes it easier to avoid distractions like going back playing GAA with Eugene or joining the local jiu-jitsu club or the gyms 6-week muscle making a challenge.