August 2018 I did the City to Surf 12km in 1 hour 14 mins and it nearly killed me. One year later I set out to do the full marathon. I had set myself to do the Cork City marathon in May but just didn’t train enough for it and it fell through I didn’t make the same mistake twice though.

I based my training around the Run Coach free app which was fantastic. I put in my goal of the marathon, my last run event time, days I’m available to train and it generated a training program for me building up for the marathon. Also, used Strava to track my progress and tracked 170kms in July so I was putting in the hard work.

My training was structured around a river loop in Perth CBD, going over the two bridges that were 10km so did that at lunch and after work. It took out all thinking of worrying about distance, having to check my phone instead just head down and run. It also really helped build my confidence in being able to complete 10km in an hour at a reasonable comfort level.

When I did my first half marathon in Joondalup I remember seeing the last 5km and being ecstatic as I knew from running the parkruns every Saturday that I could do 5km easily and its only 30more minutes. I wanted the same effect for the marathon just with 10km, which actually did work.

One other thing I had an accountability buddy in Simon Davies who had completed a marathon previously and does half marathons for fun. He would ask me nearly every week how much did I run over a weekend or last week. He made me feel guilty for only running 17/18km at the start of my training program which actually leads me to find a proper program in Run Coach as before that I was kind of doing it my own way.

My City to Surf Marathon

The Plan: I set an overarching goal of 4.45minutes and I thought this was very optimistic especially when I had never run more than 30km and when I tried to I got as far as 29km and had to call Martina to collect me. Regardless the real goal was just finishing the marathon. Like most things, I had a plan….

This plan was pretty effective. Unfortunately, I strained my IT band inside the 3km of the marathon and it stayed relatively same pain level till 32km. I was used to training in pain so I just tried to zone out and stay behind the pacer who wasn’t running too fast. Using the pacer made it so much easier to be able to zone out and not worry about time or slowing down, especially when there were some hidden hills around Nedlands that I wasn’t expecting.

I stayed with the pacer till the top of the first hill in Kings park but I pushed myself too much and burnt myself out so slowly started losing them after that. Luckily the pacer was going pretty quick for the first 22km so we had gained sometime before Kings Park. Took gels on the second hill. When I got out of Kings Park it was pretty painful but I looked at my phone and seen I had done 32km in 3 and half hours so I was on track and just needed to keep pushing.

After this, I broke it up mentally into two 5kms. That first 5km from 32km to 37km was torture, every street seemed to be a hill for a while. My legs were in bits, the IT band starin had got proper sore at this stage and even slowing down for water, it was agony to try to get back running. My hips and left knee were crocked. Then I had people start to pass me out which was demoralizing but not till around 38km I realized they were all nearly doing the half marathon. Next thing my music stopped and I realized that was only an hour since last time I checked and there ws still hope of completing inside my goal which completely lifted me and I was able to run pretty quickly for the last km.

Was met at the finish line by Martina whi made a massive effort to go see it since all roads were closed so she had get bus into town and bus out to floret. Got presented a huge medal at the finishing tent with yoghurts, fruit, electrolytes and the best muffins I have ever tasted. Also, got a free massage in the tent and t-short for completing the marathon.

It probably wasn’t the easiest marathon to start with but I didn’t want to make excuses and delay for the Perth running festival flat course so I went headfirst into this. There were quite a few hills, especially in Kings Park. 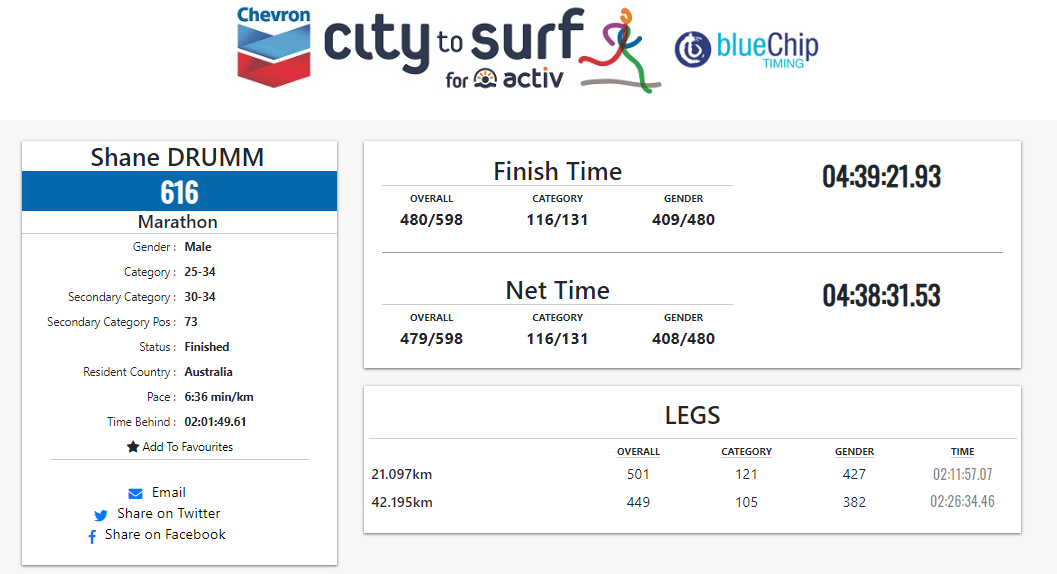